Todd Jason Baker was born in North Vancouver, British Columbia in 1965. He is the grandson of the (late) great leader and speaker Chief Khot-la-cha (Chief Simon Baker). He has lived most of his life in North Vancouver and completed his high school education and many years of post secondary education there.

He began drawing for his tribe, The Squamish Nation, at the age of thirteen and had Bill Reid critique his first piece in 1983. He went straight to producing his first silkscreen limited edition. Since then he has done numerous pieces for institutions around the country. These include the Love Doves for the Peace Federation of Canada, a variation of the doves for the Teachers Federation of B.C., and Good Medicine for the Canadian Lacrosse Association. He continued his work for the Teachers Federation and created more designs for the Diabetes, and Heart and Stroke foundations.

Although thoroughly enjoying his work here, Todd’s interests lay in fashion. This passion drove him to begin school in Los Angeles and New York. While attending school he was honoured with a trip to Paris for being the most accomplished artist of the school year. He began a new career as a fashion designer and worked for design houses such as Donna Karan and the Gap. After studying and working in NY for 9 years, living in Paris, France and London, England, Todd finally came home to his family. Since his return his dream has been to carry on a cultural tradition of bringing knowledge to the people through the looking glass of the northwest coast native art and its legends. 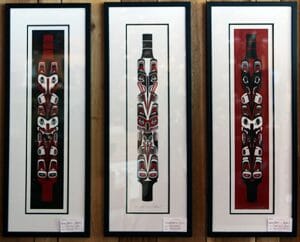