While growing up in Alert Bay, Sammy had early on started to watch the local carvers and his grandfather, Chief William Robertson create masks, talking sticks and other carvings for the local potlatches. It was William who gave Sammy the cultural name of Giyosdisalas, which means Leading the Way.

He started carving when he was 12 years old. By the age of 22, he had progressed to mask carving. He apprenticed under Simon Dick who assisted him in the refining of his work. Eddie McDougal showed him the technique of creating cedar bark regalia and the preparation of cedar bark to adorn masks. Sammy has created major totems, ceremonial masks and drums. 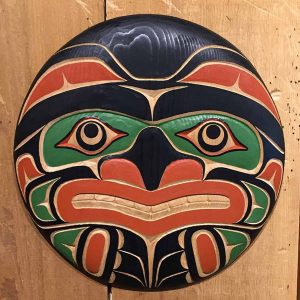