Ross and his brother Jonathon Henderson began carving at a young age, watching and learning from one another. His great grandfather is Gidion Whonnock on his mother’s side. While growing up with his mother’s side of the family, Ross had the rare opportunity to watch his world renowned grandfather, Chief Sam Henderson (on his father’s side) carve totem poles on his frequent visits to Campbell River. Ross began learning traditional songs from Chief Frank Nelson and other chiefs when participating in potlatches, feast and cultural events. Ross started to carve at the Thunderbird Park carving shed, which is located on the Royal British Columbia Museum grounds in Victoria, British Columbia. Ross has been carving for about twenty years. He enjoys producing totem poles, rattles, paddles and masks. Ross currently resides in Fort Rupert, British Columbia.

“I will continue to carve with respect to the ways my father has taught me with the proper protocol in the ways things are done. I will do my best to preserve and restore what I can of my culture as I feel an obligation to make sure there will be something left for my children and for future generations of the Kwakwala speaking people.” 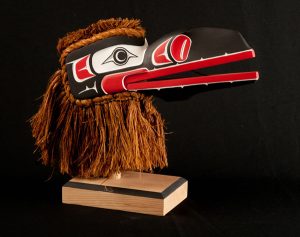