Rodney Kolausok was born in Inuvik, North West Territories in 1970. He has lived in the Vancouver area since 1995.

Rodney started carving at the age of 5. He began working with soapstone when he was eighteen years old, perfecting his skills under the watchful eyes of established carvers Joe Nasogaluak and Bill Nasogaluak of Tuktoyaktuk, and T.T. Curly and Qusiaq Qusiaq of Cape Dorset. His father was also a carver of whalebone, antler and wood. Over the years Rodney has found his own style and his sculptures are beautifully finished. Many of his pieces present a flavor of humor or play. 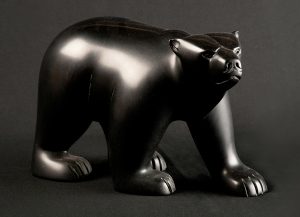