Pat Dixon was born in Skidegate, a Haida community in the Queen Charlotte Islands, British Columbia in 1938. He moved to Vancouver in 1966.

Carving exclusively in Argillite, Pat Dixon has established himself as one of the preeminent Haida artists of his generation. He creates beautiful totems, Jewellery and sculpture in the stone that is found only on Haida Gwaii (Queen Charlotte Islands). Many of his carvings are inlayed with abalone.

Pat Dixon credits Pat McGuire for helping him define his style and has subsequently influenced and mentored numerous established and up and coming artists himself.

The creations of Pat Dixon are in very high demand and can be found in numerous public and private collections around the world. 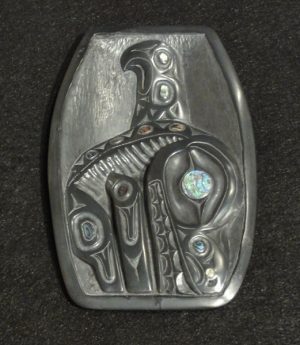