Mathew Tunnillie is an up and coming artist from the Cape Dorset region in the Nunavut Territory. Mathew was born February 1984 and is part of a family of carvers.

Mathew describes his grandfather, Qabaroaq Tunnillie, as having the most influence on his carving. Mathew works primarily in soapstone, focusing on his favourite subject, wildlife. He prefers carving birds, bears and walrus. Animals play a vital role in the everyday life of the Inuit people, and only in the recent past has the peoples’ dependence on them lessened. Cape Dorset is one of the most famous art producing communities in Canada’s north.

Sadly, Mathew Tunnillie passed away in 2009. 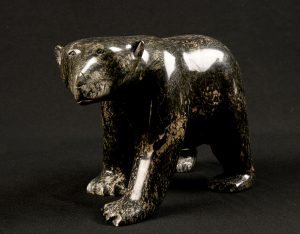