Jody Broomfield was born in North Vancouver, British Columbia in September, 1976. He has studied and honed his artistic abilities under the watchful eye of master carver Klatle Bhi and became a full time artist in 1999.

Jody enjoys working in many mediums, including wood, glass and metal. Working in diverse mediums has allowed him to create beautiful masks, panels, carved entry doors and house posts as well as an array of paintings and prints and silver and gold Jewellery.

The Vancouver Organizing Committee (VANOC) for the 2010 Winter Olympics chose Jody’s design for the “Four Host First Nations” logo. In addition to being the defining image representing the First Nations participation in the 2010 Olympic Games, the dedsign was used by the Royal Canadian Mint on a limited edition $75 Gold Coin.

Jody has provided images for the Royal Canadian Mint on a number of other occasions. His other commission work can be found at the Vancouver Convention Centre, the West Vancouver Recreation Centre and numerous public and private properties throughout the lower mainland.

In 2009 a Steinway grand piano painted by Jody was auctioned off by the BC Lions Society for Children with Disabilities. The winning bid was in excess of $500,000. 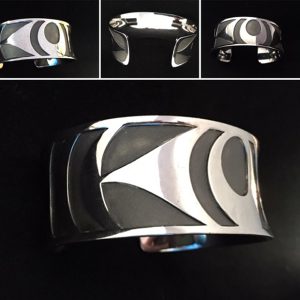