Working in soap stone, Etulu is best known for his carved loons, often in flight, as well as for his carvings of resting wolves. Although Etulu is aware that certain subjects are perennial Inuit art market, his work is driven by more personal concerns. Etulu is now travelling across the arctic as a singer of traditional Inuit folk music. Etulu’s artistic exploration of drum dancing and singing springs naturally from familial pride and the influence of countless stories he heard by Etidloie’s side.

Etidloie has lived his life on the land in the traditional Inuit manner, resulting in early sculptures filled with figures engaged in daily practices of nomadic life: hunting, fishing, cooking or sewing.

Etulu’s exhibition record dates from 1976. He has exhibited in Canada, Germany and the United States. The Art Gallery of Ontario, the Vancouver Art Gallery, and the Winnipeg Art Gallery all have Etulu’s work as part of their permanent collections. 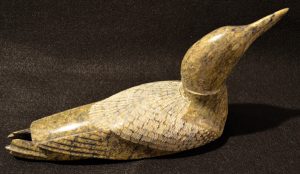