Dorothy Shephard was born October 5th, 1946 in Victoria, British Columbia, Canada. She was born into the Nuu-cha-nulth Nation who inhabit the southern region of Vancouver Island. Dorothy takes the Killerwhale, known as a powerful and skilled underwater hunter, as her family crest symbol.

Dorothy is one of the few women from her generation to keep the art of basket weaving alive. The tradition was passed down to her from her mother, Effie Tate. Dorothy weaves three corner grass, white grass, sword grass and places cedar bark at their edges, all which are carefully hand-picked from the coastline of Vancouver Island.

She began making miniature baskets at the young age of ten and has been weaving for over forty years. Each basket portrays the traditional designs of the Nuu-cha-nulth nation such as birds, whales and canoe hunting. Dorothy carefully weaves her fine baskets to reveal intricacy and the utmost quality of workmanship. Dorothy Shephard is a well established and highly respected Nuu-cha-nulth basket weaver and her work is found in various collections. 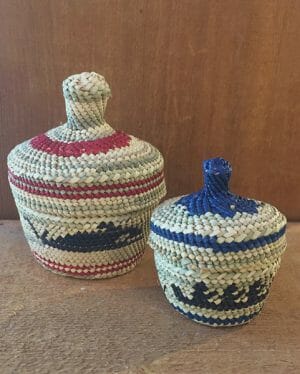