Dennis Pollard was born in Skidegate, Haida Gwaii (formerly known as the Queen Charlotte Islands) off the north west coast of British Columbia. His family comes from the Tanuu village. His crest is Eagle and his family is the last of the Eagles of Tanuu. Dennis is the nephew of Chief Gitkun, Reg Young.

Dennis began carving at the age of 5 under the guidance of his mother Shirley and uncles Jackie and Glen Pollard. He has tried many different mediums but he prefers Argillite to all others. Argillite is found only in Slate Chuck Mountain on Haida Gwaii and requires a full day journey to retrieve it. A person is only allowed to bring out as much as they can carry. Dennis tries to return with 150 pounds of the heavy yet fragile material on each journey.

The pieces created by this artist are a testament to his strong cultural ties, natural talents and those that have helped him hone his craft. 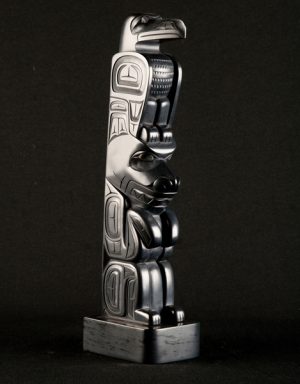