Haida artist Clarence Mills was born at Skidegate, Queen Charlotte Islands, British Columbia in 1958. He is a member of the Eagle Clan and takes the Spirit Raven and Grizzly Bear as his crests.

His grandfather Jimmy Wilson was hereditary Chief Skedans. His great-grandfather, carver Henry Young, gave him his Haida name – Gahghinskuss, meaning ‘out of your own land’.

Clarence has established markets for his artwork in Canada, the United States and Europe. 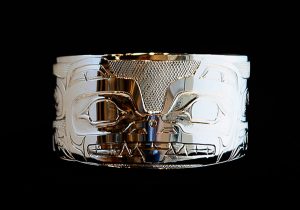