Bruce Bird is a self taught antler carver of Metis and Cree ancestry who lives in Qualicum Beach, British Columbia. Bruce first tried his hand at antler carving as a teenager. In 1975 he trained as a saddle and leather carver. He has recently rekindled his interest and passion for carving antler and now concentrates his efforts in this medium.

Bruce feels that his connection to the land and his heritage have helped him in his work and describes himself as an intuitive carver:

“I always pay attention to my inner feelings while carving. When I start a new piece I usually have a pretty good idea of what it will become but the antler itself gives me ideas and although I can visualize the final shape to some extent, sometimes an eagle will turn into a raven or a closed mouth will open up to reveal its tongue.”

Bruce’s work is contemporary in design but ageless in tradition. Antler has been carved for generations.

Bruce has enjoyed Shamanic studies with the Michael Harner Foundation and has been instructed in creating these sacred objects in an indigenous, shamanic manner by a local practicing shaman. All of Bruce’s work has been infused with love and prayer and holds and depicts the spirit medicine of the various animals and their totems. Carving antler is a slow, spiritual process that Bruce finds satisfying to his soul. 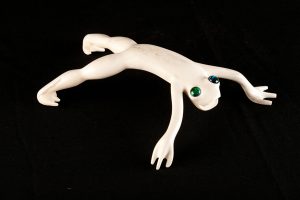