Axangayuk Shaa, RCA is a renowned Inuit artist who was born in Satuqitu, Nunavut in March, 1935. He currently resides in Cape Dorsett on Baffin Island, Nunavut, Canada.

At the age of 15 Axangayuk began carving under the watchful eyes of his uncles and grandfather, Kiakshuk. He sold his first pieces to those on board the CD Howe, a government ship that travelled the eastern Arctic from community to community every summer to provide medical care and test for tuberculosis.

He first started carving small seals and birds. He is now renowned for his large dancing walruses and bears.

Axangayuk Shaa was elected to the Royal Academy of Arts in 2003. Academicians are elected to membership of the RCA on the basis of their significant body of work that has been recognized by their peers in the discipline of their choice for its excellence and innovation. Candidates are nominated and brought forward by seven RCA members in good standing for review by the Membership Committee, which is a multi-discipline body representing all regions of Canada. The Committee considers whether the Candidate meets the following criteria:

There have been a number of exhibitions that have featured the work of Axangayuk Shaa as well as large solo exhibitions in Canada, the US and Germany.

His work can be found in many major museum collections, including the National Gallery of Canada and the Metropolitan Museum of Art in New York as well as private collections throughout the world. 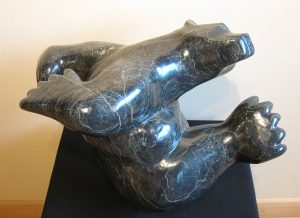